Home » Uncategorized » Breathless by Mulu and the ‘Pinnacles’

Breathless by Mulu and the ‘Pinnacles’

After spending a record breaking week in a city (Kuchin), the time had come for some die hard nature. Mulu’s Unesco world heritage park seemed to fit the bill.

At first, I was disappointed. Malaysians like things to ve very well organized, and this park was not an exception. Even inside the world famous Mulu caves, wooden boardwalks were created to make exploring easier. The adventurer in me winced. Fortunately, there was enough to see: 2 million bats flying out of their cave at sunset and beautiful formations inside he cave. They were exciting enough to tempt me into ‘cave exploration’. The basics are same as the regular cave trips: you walk through a cave, but helmets are worn, and some climbing is required (especially fun with water flowing down your path at the same time). The extra special bonus were the cave snakes, adding that extra bit of excitement to every time you put you hands somewhere you can’t see them. After all this trekking (remember: I just came from Bako national park), one would think I’d have enough. Fortunately, this wasn’t the case as Mulu also is the gateway to the ‘Pinnacles’. I had previously climbed the highest mountain in South East Asia (Mt Kinnabalu), which had left me with sore legs for two full days after the climb. The ‘Pinnacles’ reputation isn’t based on it’s height (barely more than 2 kilometers) nor length, but on it’s steepness. The mountain showed it’s difficulty by the time it took our group to walk/climb less than 5 kilometers (total distance for up and down): more than 7 hours. 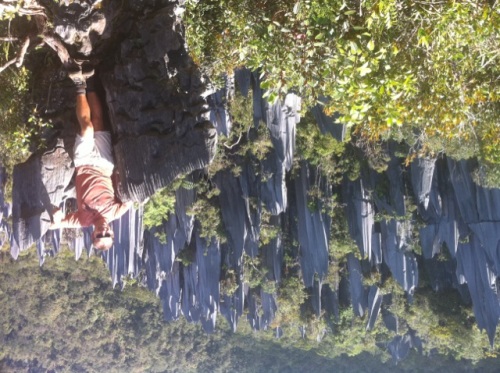 Above you can see why it was worth the climb and why the Lonely Planet calls this the ‘worst parachute landingzone in the world’.

I am typically a ‘slow climber’ preferring many stops to few and favoring taking my time to soak up the environment to ‘running’ up the mountain. I learnt to appreciate the other way during this climb, which is mostly about getting up and down (safely) and the sense of achievement back at the base camp once you’ve made it. And trust me: once you’re lying in the river / mini waterfall with a cold drink, you truly appreciate your achievement at the ‘Pinnacles’.

By gcjbos in Uncategorized on 05/06/2011.
← What comes after paradise? Back to civilization: Melakka and Singapore →