It was love at first sight. Which wasn’t surprising, as it was a warm summer day in the south of France. The setting was the legendary open air theatre festival in Aurrillac. The audience varied from local farmers, to punks with their dogs, to art critics scouting up and coming acting or singing talent.

A French friend and I ran into her performance on the street by accident. She was pretty in a strange way, wearing a cute dress with a skull on it and she enchanted the audience with funny and profound lyrics. Like every good french singer songwriter she accompanied herself by (what else) accordion, a girl playing a harp and a bearded guy on percussion. Their show had the whole audience following them through the streets and band members used doors of random houses as percussion instruments. The grand finale had the entire audience sing “we don’t have time for love, we don’t have time for being unhappy” (it sounds way better in French). I subsequently drove my French friends crazy by insisting on seeing all her three performances during the festival.

Half a decade passed. I continued playing Yoanna’s music from her CD, but as she was Swiss and never made it big in The Netherlands, I resigned to the fact that I would never see her again. Fortunately, fate has it’s ways and an event popped up in the east of The Netherlands where she would perform. Obviously, I went to see her. The setting was very very different. It was a luxury art-food thingy, where most people fortunately didn’t understand that her biting French lyrics were about people like themselves.

After the show, the few attendees who spoke French lined up to talk to her. I made sure I was the last one so I’d have unlimited time with her. When it was my turn to exchange my first words with Yoanna, I stuttered and my face turned bright red. I explained that I had seen her perform many years before and had driven 200 kilometers just to see her perform again. Understandingly she signed her CD with the dedication “for my first fan in The Netherlands”. 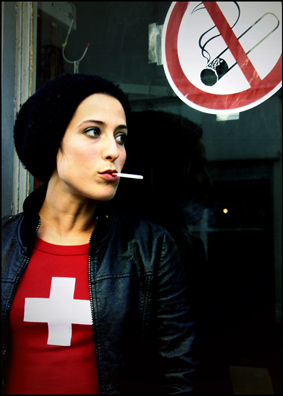