It was one of those rainy days in San Francisco. And no matter how much I loved SF, I couldn’t help but feeling stressed for the trip to Burning Man. My backpack was full. So, how was I going to carry a bicycle, additional clothes, camping gear and food and water supplies for 10 days in the dessert?
But maybe I should start with why I was going to Burning Man anyway. It was an article from 1996 which had solidly locked Burning Man on my to-do-before-you-die list. Something about camping in the dessert, great people, cutting edge art and a progressive atmosphere, just triggered a switch. Before I left on this trip around the world I hadn’t met anybody who had been to Burning Man. Just a couple of days before I arrived in San Francisco I was contemplating not going to Burning Man at all. Mainly because I was in heaven already: a paradise-like island of the northern coast of Sulawesi, $15 per day (food and accommodation included) with stunning snorkeling at a 30 second walk from my hut. Why would I go through all the cost, effort and stress to be camping in the dessert?
But then, slowly but steadily the Burning Man magic kicked in. An online plea for help quickly resulted in a reply: “just travel to Frank and he will help you get to Burning Man”. I had managed to attach everything on my backpack (which ballooned to over 30 kilo’s / 60 pounds) and after a train journey of a couple of hours I arrived in the small city of Auburn. Frank picked me up in his pickup truck and as we drove to his house he told me that we’re probably going to leave a couple of days later. To shocked to speak because of the “theft” of my precious Burning Man days, I mocked in silence. Things cleared up quickly when Frank told me he had “a dragon”. What that meant became clear very quickly: it was a massive hard foam dragon mounted on an extended golf cart, seating up to 6 persons. “It just needs a little bit of work ” Frank confessed.
A dream came true: not only did I get to go to Burning Man, I could contribute something (however little as well). For the next day and a half I helped Frank with the last errands on the dragon. He helped me get the food and water shopping done. During these days Frank (a 12 year Burning Man veteran) and his with Susan housed and fed me (a total stranger) for free and shared their life’s stories. Both retired software engineers for the first large computers, they are not only very intelligent, but their unsurpassed hospitality made staying with them a true treat. My hurry to go to Burning Man was long forgotten when it was time to leave. 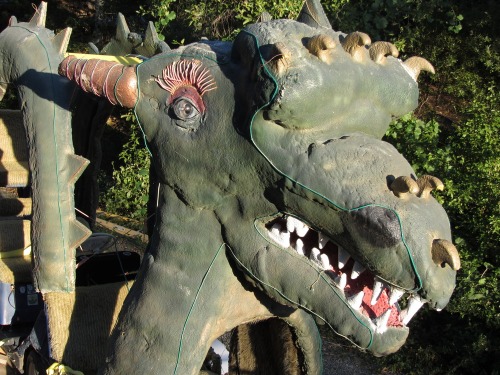