It was one of those nights of which I’ll think back later and say to myself: “I wish I had more of these”.

Due to my immobility, I decided to move out from the hotel. I had strong doubts: from my hotel’s balcony I had a great view on the main street of Mindelo. “Everybody” paraded there each night. Several friendly bars were near, ever the cash machine and the supermarket were literally around the corner.

Still, it was a great decision to move. I’m currently living in an apartment. Meaning I’ve got a living room, an en suite bathroom and a kitchen (which I’m actually using!).

The best part of the appartment is that it’s a “home”. It’s a place where I live, not just spend a couple of nights because it has the best price/quality ratio. For most of you it isn’t special to have a “home”. Even the poorest people of the planet have a home. Only refugees and people traveling around the world don’t have a home. Moving in here made me realize that the longest I’ve stayed somewhere is around 10 days. This only happened 3 or so times during this (until now) 15 months trip.

If having a (temporary) home made me happy, having great people in there delighted me. Thanks to a French friend, (who has been amazing), I got to know a couple of great Cape Verdian artists. Super cool: they gave an impromptu “concert” in my living room! They’re also working on a project for carnival, which should be a great experience!

I guess it’s universal to feel at your happiest around people who create. 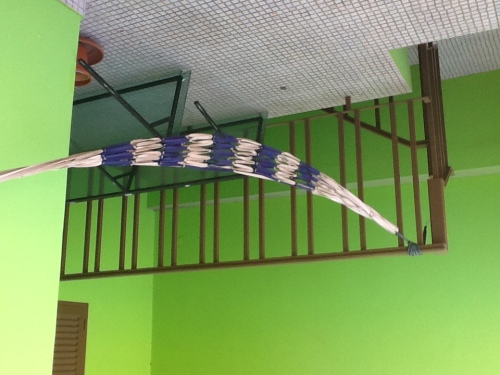