One night, a couple of days ago, I arrived home late. Upon entering the hallway I heard a sound from upstairs. My blood froze in my veins: burglars!

I shouted: “who’s there”?.
No answer.
I tried again: “HELLO!”.
Silence.
Looking around each corner I made my way to the first floor. I quickly dashed for the kitchen drawer and took the two biggest knives I could find. Armed, hyped up and scared shitless, I went up to the second, third and fourth floors. I carefully checked everywhere, but found nothing. Not a trace. I assumed I must have imagined it and didn’t give it anymore thought.
Today was an exhausting day. To give my mind some rest I decided to do some cleaning. I had only just started vacuuming when a cat jumped out from underneath a drawer. For your info: no cat lives in this house. The cat ran away and hid deep underneath the staircase. I decided to clear away some stuff in front of the cat, open a garden door so she could go outside and continue cleaning. When I returned downstairs the cat was gone.
Later that day I decided to take the boat for a sail across Amsterdam’s beautifully lit canals. I was packing my keys and some warm clothes (after all, it’s summer here) when I heard somebody putting something in the mailbox. I didn’t pay immediate attention to it, despite the odd hour (22.00). When I was about to leave the house I immediately noticed a letter with an image of a cat in the mailbox. The letter described that the cat had gone missing several days ago. From the picture I could clearly see that it was the same cat that I had seen this morning. Surprisingly enough, the address from the owner was the address from the neighbor. The owner was quickly localized and turned up, equipped with cat food and the cat cage.
We looked for 20 minutes for the cat in the garden, but found nothing. When shaking the cat food box (I thought that only worked in commercials?), a different cat turned up. With mixed feelings we gave up. The owner was very happy that the cat had been sighted today, but sad it was no longer there.
The friendly owner was just about to leave when suddenly. We heard a sound. We thought it was the other cat that wanted to “steal” the food. But (again) I was convinced that it was from inside the house. We checked underneath the staircase and very very well hidden we saw a little ball of black hair: THE MISSING CAT! The owner was almost moved to tears and ceaselessly embraced the cat. That cat must have been the burglar too. I apologized for the unintended Catnapping. After the neighbor went to her own house, I could hear her saying nice things to the cat through the wall for a long time. 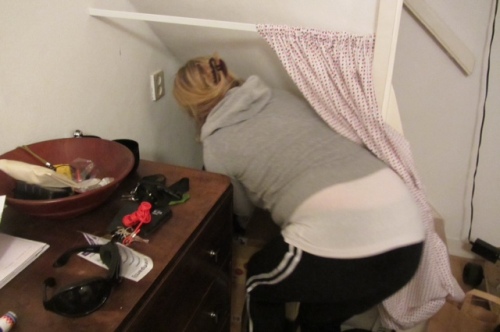 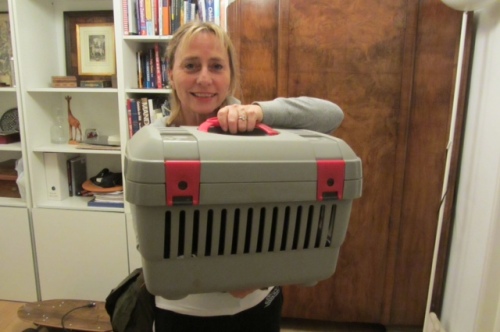